It’s no secret that I’ve been pretty stressed lately. Summers aren’t too much fun for me. There’s just so much to do, not enough time to do it. Deadlines and to-do lists plus miscellaneous events and tournaments and practices. I’m a little worn out. Actually, I’m a lot worn out. Stress will do that to ya.

I am so grateful to my mom who just…handled everything yesterday. She just did. Hung out with my kids…even picked Beezus up from her last day of school. My sister joined in the fun with her three kids in the afternoon. So Ramona and two of her cousins were thick as thieves and ran amuck. Well, they ran around doing all the things that kids should do in the summer: trampoline, sprinklers, playing all day…only stopping to nag about being hungry or thirsty. While they were off playing, Beezus and the little bit (who is 2) hung out. They’re good buddies.

It worked out that my dad needed to drop his car off at the dealership after he left his office, so I left mine and went to pick him up. We chatted all the way to their house. The other night, he had started telling stories of stupidity. Well, things he had done when he was younger that were pretty darn stupid and it’s amazing he’s still alive. We continued the conversation…he added more stories and examples. It really IS amazing that my dad is still alive.

My parents still live in the same house I grew up in. We moved there when I was about 7, but most of my growing up years were at this house. When we got there, my mom and my sister were finishing up dinner. I felt pretty darn spoiled and so incredibly grateful. It’s amazing how nice it is to have someone else cook dinner for you every once in a while. Of course, I wasn’t much help at all. I kinda just sat there. I felt bad, but I was just so gosh-darn tired.

Since the evening cooled off so nicely, we decided to eat outside at the picnic table my parents have in their backyard. I ended up being thoroughly entertained by niece most of dinner. That kid cracks me up.

In the back of my mind, I probably assumed it would happen, but I didn’t even notice that my dad had built a fire in the fire pit until I heard the fire crackle behind me. All of a sudden, on a Wednesday evening in my parents’ backyard, it smelled like camping. But even better. My dad brought out all the fixins for s’mores. Because that’s the kind of gramps he is.

My dad has s’more making down to a science. He waits for the coals to burn down so that it’s perfect for roasting marshmallows. I like to break all his rules and light my marshmallow on fire. But since I’m usually not planning on eating actual s’mores, it works out for me. You see, I like to toast the hell out of the mallow and then pull off the outside, toasted layer. It’s like white trash crème brulee, my friends. The crystalized and crispy sugar is the business. Then, of course, you stick the marshmallow back in the fire and toast the hell out of it all over again. Repeat until marshmallow is gone. Or falls off into the fire pit because you let it roast too long.

My sister, my dad and I sit around the fire for quite some time. I stayed much later than I planned, but I can’t seem to make myself leave. The kids are in and out of the house, wanting 17 s’mores and being disappointed when we don’t give them that many. We talk and talk and tell more funny stories. My mom joins us after a little while. Somehow, we are discussing medical maladies and surgery stories. I think my sister’s ultimate goal is to gross my mom out. My brother calls at one point, wondering if I’m still at Mom’s. Him and his family are on their way home and thought they’d stop by if we were all here. I laugh and tell him that I should’ve left hours ago. He said he would take his chances. Surprise surprise, I was still there when they strolled out to the backyard.

I’m not sure how long we stayed out there. Someone stirred the fire up to try and generate some heat. We were all a little surprised at how chilly it got when the sun went down. And then, all of a sudden, my youngest brother was there too. The discussion turned to his wedding plans. At this point, I became very aware of how far two states away really is. Because having the four of us just happen to show up at my mom and dad’s makes you very aware that the 5th (and oldest, ha) sibling should be there, too.

It became too cold to stay outside. And, truth be told, it was exactly the push I needed to get my butt in gear and get home. But even as I had my kids get ready to leave, new conversations began and plans were made and more time passed. Once again, I wasn’t quite ready to leave, but I knew I had to get to all the things I had been putting off the entire evening. Reluctantly, I herded my children out the door and we drove home. My kids were exhausted, but they chattered most of the way. And I was content. An evening with my family was just what I needed. Of course there was still so much to do. But for a moment I let it all go. It’s amazing how you can put off dealing with the stress and deadlines when you smell like campfire and roasted marshmallows…and summer. 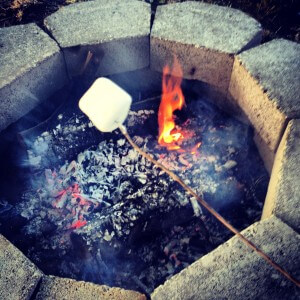 4 Replies to “I Know Where the Summer Goes”