I don’t remember being tormented by my children “graduating” preschool or starting kindergarten. I remember being sad that they were nervous and scared, but I don’t remember having a “my baby’s growing up!” moment back then. Even when Beezus started middle school, I was all business. I don’t think it occurred to me to be sentimental or sad. It was just the next step! Part of life!

I’m not saying my heart was made of stone. I just think I was working so hard to just keep us all afloat and alive that recognizing milestones wasn’t something I could focus on.

Until I couldn’t focus on anything else.

The night before Beezus started high school, I realized there were a bunch of milestones sitting on my chest and weighing on my mind. They weren’t going to let me get away with ignoring them anymore. It wasn’t so much that she was starting high school-I was excited for that-but that all of a sudden I was on a deadline. Without realizing it, college became this ticking time-bomb and the countdown on the clock was staring me in the face. It was like I could actually see the glaring red numbers showing me exactly how much time had already passed. How much time I had missed when I was so busy just surviving.

I’m not dumb. I know that she’ll always be my daughter…but it will all change when she leaves for college. I won’t be able to squeeze her any time I want. She won’t be around for me to cook her favorite meals. (Shut up, it happens sometimes.) She won’t come home to me and us and our house each night. I won’t be able to just walk into her room to see how she’s doing. She’ll be her own person. She’ll be grown. 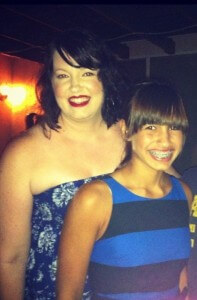 This all hit me like a ton of bricks the night before her freshman year. It was wrecking me in ways that I had never experienced. I have no recollection of most things that night. But I remember climbing into bed. And then getting right back out and walking down the hall to her room.

I wordlessly climbed into her bed with her. She was still awake.

And then there couldn’t be any other words from me. The hot tears ran down my face and soaked her pillow as I tried to take a deep breath.

“Are you crying??” she asked. If only to give her something to say.

She knew that I was, of course. We both laughed. And then we resumed crying. Because of course I made my child cry.

When I could finally speak, I told her that I was freaking out. I told her that I was so excited for her and all things high school, but that all of a sudden, I was losing my mind over the fact that I only had four years left before she left for college. I told her that it had snuck up on me. I told her how proud I was of her…how much I loved her. And that I knew I was being a little bit ridiculous. But that I just couldn’t help myself. We laughed that I couldn’t seem to stop crying. At all.

I knew she needed to sleep. I knew that I was supposed to let her.

But I also didn’t want to leave. 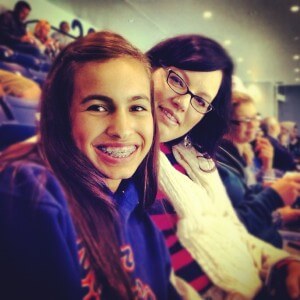 We grew up together, her and I. When I was a (too) young mother just struggling to just survive, she kept me sane. When my heart was broken in a million pieces, she put me back together. At times when I didn’t think I was doing anything right, she made me believe that I was. She was my bright spot when everything was dark. If you wonder why the thought of sending her off to college leaves me wrecked, this is why. She is more than just a piece of me. She’s one of the very best pieces of me.

And I’m going to have a very hard time letting that piece of me go.

5 Replies to “at some point, I’m going to have to learn to let go”